In southern Dade County, a mysterious and often fatal condition of adult horses and livestock had begun to be recognized by the early 1980s. This was known locally as “Grove Poisoning”, reflecting the belief that that toxic chemicals sprayed on trees in local fruit groves were the cause. Affected horses were dull, apathetic and incoordinated, some had convulsions, ulcers of the tongue, and whitening or streaking of the corneas of the eyes. Most of them died within weeks. The problem was seen most commonly in the late summer or fall.

Beginning in the 1970s, a University of Miami botanist, Julia Morton, began to walk the properties on which these deaths were occurring. She noticed an abundance of wild Guatemalan Indigo plants (Indigofera suffruticosa) and initially supposed that these were the culprits. By the 1980s, however, Dr. Morton had investigated many more incidents and had become convinced that the condition was actually caused by a different indigo herb, creeping indigo (also known as trailing indigo; initially identified as Indigofera spicata), that had widely invaded local pastures and was being enthusiastically eaten by horses. She compared Grove Poisoning with reports of Birdsville Indigo Poisoning, an almost identical nervous system disease of horses in the north of Australia grazing another Indigofera species, I. linnaei.

By 1987, it was estimated that at least 300 horses in the south Dade county area had died of Grove poisoning so, at the urging of Todd Hardwick from the University of Florida’s Cooperative Extension Service, Dr. Morton decided to present her ﬁndings at a local meeting of concerned equine veterinarians and horse owners. She explained that creeping indigo had ﬁrst been imported into the United States in 1925 and established at the Agricultural Experimental Stations of the universities of Florida and Hawaii, so that its supposed utility as livestock forage and ground cover could be studied. When used as a dietary supplement, creeping indigo was found by these early investigators to be highly palatable and nutritious (roughly equivalent to peanut hay) but when livestock, rabbits, and guinea pigs were fed CI as their primary diet, they sickened within weeks and usually died if feeding continued. After some initial skepticism, the causal role of CI was accepted by local veterinarians, although the condition was unknown elsewhere in the state.

Investigation of CI at UF had stopped by 1936; however, by the mid 1950s the now naturalized plant was identified at multiple sites around Alachua County (the home of UF). Simultaneously, almost certainly as the result of a separate CI introduction of unknown source, the plant had naturalized and was spreading in Dade County. Speculation as to the origin of this Dade county introduction have included fill imported into South Florida for land reclamation, seed from Cuba or Puerto Rico, or importation by renowned botanist David Fairchild into the Tropical Plant Introduction Garden at Chapman Field in Miami. The first identification of the plant in Dade County was in 1940 in the lawn of a Homestead resident. Following decades of spread from at least these two foci (Alachua and Dade counties), CI had advanced throughout the entire state by 2016  (Figure 1) and is now found in the adjacent counties of neighboring states.

Beginning in about 2000, individual cases and small outbreaks of the disease in equids began to be recognized in central and north-central parts of the state, especially in areas north of Tampa and around Brooksville. Since then, CI cases have continued unabated along the I-4 corridor and sporadically in the northern counties of the state and in Alabama and Georgia. This extension in geographic range of the syndrome appears to correspond to increasing abundance of creeping indigo in the central and north central parts of the state. Creeping indigo now has become a very common plant around Alachua and Marion counties and can be found growing in any disturbed ground, especially along roadsides and the edges of footpaths, including many at the University of Florida. Even more threateningly, it has become the dominant herb in some pastures in the Ocala area.

The Indigofereae are a small tribe of often very attractive, pink to red-ﬂowered shrubs and herbs. The largest genus is Indigofera which is pantropical, with 75% of the ~750 species restricted to Africa–Madagascar, and the rest in the Sino-Himalayan region, Indonesia, and Brazil. Because of their complex chemistry, Indigofera contain many toxic and medicinally used species. These toxic chemicals have evolved as a defensive response to predation by herbivores and pathogens. Other Indigofera are economically important indigo dye-producing and pasture legume species that occupy an extremely wide range of different habitats. Indigofera spicata is native to East Africa Madagascar, and Indonesia. It was valued as a cover crop in coffee estates in Africa and was introduced into India, Java, Malaya, and the Philippines both as ornamental ground cover and a cover crop for tea, rubber, oil palm, and sisal plantations. It has also been introduced into Australia, several paciﬁc islands, central America, and the Caribbean.

At the time Dr. Morton published her work, I. spicata/I. hendecaphylla were considered synonymous and referred to as I. spicata complex. In 1992, however, it was discovered that they were actually different species and review of voucher specimens at the major herbaria in Florida indicates that creeping indigo in Florida is I. hendecaphylla. Both I. hendecaphylla and I. spicata have been connected with equine and livestock deaths, although such an association remains to be conﬁrmed for authenticated I. hendecaphylla in Florida and thus it will be important to collect plants from all future outbreaks and have them identiﬁed by the UF Herbarium. 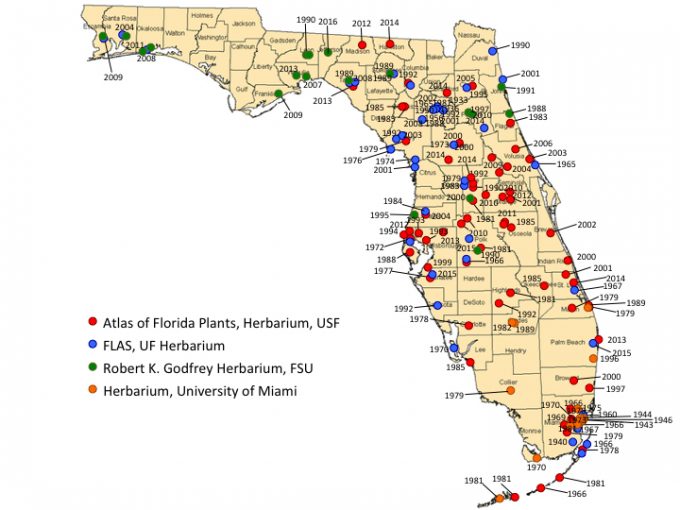 Creeping indigo is prostrate (low profile) to sub-erect with branched runners fanning out in all directions from the crown of a white, slender, tapering taproot ﬁrmly set in the earth and descending nearly a meter (Figures 2-4). The stems are pale-green to yellow, tough, and thickly set with alternate, pinnate, clover-like leaflets that are 1-5 cm long. The slender, tubular ﬂowers are brick-red to pink (mostly pink around Gainesville). The most characteristic and identiﬁable feature, the needle-like, stiff, sharp-tipped seed pods, 1-3 cm long, are borne profusely in dense, downward-pointing clusters. The plant, perennial in tropical and subtropical climates, is killed back in winter in central and north-central Florida but sprouts from the root in the spring.

Both plants are prostrate to sub-erect with branched runners fanning out in all directions from the crown of a white, slender, tapering taproot firmly set in the earth and descending nearly a meter (Figures 2-4).  The stems are pale-green to yellow, tough, and thickly set with alternate, pinnate, clover-like leaves that are 1-5 cm long. The slender, tubular flowers are brick-red to pink (mostly pink around Gainesville). The most characteristic and identifiable feature, the needle-like, stiff, sharp-tipped seed pods, 1-3 cm long, are borne profusely in dense, downward-pointing clusters.  The plant, perennial in tropical and subtropical climates, is killed back in winter in central and north-central Florida but sprouts from the root in spring.

Figure 2. Indigo spicata specimens obtained at the University of Florida and authenticated at the UF Herbarium

Figure 4. Indigo sp. Dense thatch of creeping indigo comprising >40% of a bahiagrass pasture in Ocala, FL. Note the abundant pods and evidence of grazing by horses in the pasture.

Consumption of 10 pounds I. linnaei daily for 2 weeks is sufﬁcient to cause disease. Suckling foals may be affected by ingestion of toxins in their dams’ milk. Both neurologic and non-neurologic signs are seen.

Figure 5. 11-year-old mixed breed gelding with creeping indigo toxicity from near Brooksville, FL. Note the dull appearance, staining with ocular discharge below the eye, and flaccid lower lip. On close inspection there was also marked edema of the right cornea and blepharospasm or the right eyelids.

Figure 6. 5-year-old Paso Fino gelding with creeping indigo toxicity from near Homestead FL. Note the extensive ulcerations of the gums above the upper incisors. This horse’s tongue was also severely ulcerated.

Two important toxins account for the signs of creeping indigo toxicosis – namely, 3-nitropropionic acid (3-NPA) and indospicine. There is evidence that 3-NPA causes the largely irreversible neurologic signs described above while indospicine causes the corneal edema, ulcerations, and other non-neurologic signs. Each of these toxins is described brieﬂy:

Horses that are quickly removed from the offending plants often recover completely, but gait abnormalities sometimes persist. There is no effective treatment. Early investigations into the prevention and treatment of Birdsville disease in Australia proposed the use of arginine-rich protein sources such as peanut meal (4.3% arginine) and gelatin (8.0% arginine). The lack of signiﬁcant liver lesions in horses because of their relative resistance to indospicine, together with the likelihood that the neurological disease results from 3-NPA poisoning, suggests that arginine alone would have little beneﬁt in the treatment of nervous signs although nonneurologic signs may respond. Thiamine was also suggested as an effective treatment for nitrotoxicity in ruminants but others showed this treatment to be ineffective. The fact that 3-NPA neurodegeneration is used as an induction model for Huntington’s disease research is testament to the current futility of all treatments. Management of affected horses should include their removal from the source, conﬁnement to prevent any injuries and non-speciﬁc supportive therapy. It was previously suggested that livestock poisonings by I. spicata can be prevented by keeping the proportion of this plant below 20% of the total forage available but recent evidence does not support this view. The best means for preventing poisoning is to stop access by horses to paddocks where creeping indigo is present or to remove plants by physical means or herbicide application.

Although there is no herbicide commercially recommended for eradication of creeping indigo, the University of Florida Pasture Weed Identiﬁcation and Control page a the IFAS Extension EDIS website (https://edis.ifas.uﬂ.edu/topic_pasture_weeds), suggests spraying either of two herbicides containing aminopyralid: Milestone (Dow AgroChemicals) at 5 ﬂ oz per acre or GrazonNext HL(Dow AgroChemical) at 24 ﬂ oz per acre. Retreatment the following year will likely be necessary. Dead plants retain toxicity and must be removed and disposed of. Manure from animals that graze herbicide-treated pastures should not be composted. Also, any grass clippings removed from these treated pastures should not be composted. Be sure to follow all label directions when using pesticides!

Additional information can be found in the EDIS publication Creeping Indigo, A Poisonous Plant of Concern in Florida Pastures at: http://edis.ifas.ufl.edu/ag399