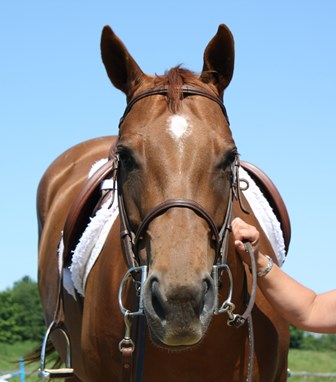 Horses who suffer from anhidrosis typically have an increased respiratory rate and cannot properly cool down after exercise.

Anhidrosis is defined as a decreased ability to sweat in response to increased body temperature. Failure to sweat has been described in both horses and man and it manifests primarily in to hot, humid climates, like Florida and other Gulf coast states. It is an important problem particularly in performance horses because thermoregulation is mainly accomplished by sweating. In the horse, between 65-70% of body heat is lost via the evaporation of sweat. A humid environment further decreases efficiency of sweat evaporation and cooling of the horse.

Sweat glands are densely packed in horse skin (810 glands per cm2), primarily exiting to the skin surface at a hair follicle. These tubular, coiled glands have a rich blood supply and numerous nerves are found in close proximity to the glands. The sweat produced has a number of components, including proteins, electrolytes and significant amounts of water. The proteins found in sweat are primarily glycoproteins, surfactants and proteins associated with skin defense. Electrolytes (including sodium, potassium, and chloride) are found at a higher concentration than blood, particularly potassium.

Various syndromes have been previously suggested to explain the cause of anhidrosis, including hypothyroidism, low chloride concentrations and abnormally elevated epinephrine levels.  None of these associations have been satisfactory except that decreased urinary fractional excretion of chloride is a consistent finding.

In chronic anhidrosis cases, sweat glands ultimately atrophy.  In acutely affected horses, these abnormalities are not yet present, suggesting a role for long term downregulation of beta2 adrenergic receptors on sweat glands.  More recent research has shown that macrolide antibiotics (used to treat Rhodococcus infections in foals) will stop sweat production in treated foals, leading researchers to suggest that chloride transport across sweat gland cells may be reduced in anhidrotic horses as this is an effect of macrolides.  This is a very early finding and is being further investigated.

Researchers have not identified any age, sex or color predisposition for developing anhidrosis. Raising foals in a hot, humid climate is not protective, as both locally-bred and imported horses may be affected. Epidemiologic studies have suggested a prevalence of between 2-6% of horses, though the prevalence may vary depending on the severity of climate and the quality of these studies was variable. In a recent study of non-racetrack Florida farms, 1.8% of horses were anhidrotic and 11.2% of farms reported at least one case of anhidrosis.

Anhidrosis can often be diagnosed presumptively, based on appropriate clinical signs and examination by a veterinarian. Patients often present with increased respirations and failure to cool after exercise.  In situations that should elicit copious sweating, anhidrotic horses will have minimal or no sweat production.  Some areas may still sweat, which can be confusing. In chronic cases, horses develop dry flaky skin (especially on the forehead), hair loss, fatigue, anorexia and decreased water consumption.  Confirmatory testing utilizing intradermal injections of epinephrine or terbutaline can be performed if the diagnosis is unclear or to evaluate treatments.

There is no proven therapy for anhidrosis except moving the horse to a cooler climate. Not only does this help manage the high body temperatures, but horses are also noted to start sweating once in a cooler environment.  Therefore, it is essential that non-sweaters living in Florida are carefully managed to prevent high body temperatures from occurring. Some horses will get into water sources found in their pastures (such as ponds or big water troughs) to cool off.  Also ensure that they have constant access to cool, clean drinking water. Adjunctive feeding of electrolytes or salt mixtures (“Lite salt”) will help them maintain appropriate total body electrolyte concentrations.

Many horse owners feel that various feed supplements offer relief to their horses, but this is an anecdotal observation with no research support. Other treatments are attempted with minimal evidence, including oral supplementation with dark beer, salts, vitamins/electrolytes or thyroid supplementation. Most of these are not dangerous, but also do not appear to improve the animal’s ability to sweat. Medical treatment has also been attempted with ACTH, alpha-2 agonists, prostaglandins (Lutalyse), antihistamines and Methyldopa (Aldo-Met), but has been generally unsuccessful.

A recent study performed at the University of Florida found that acupuncture and herbal medication may have improved sweating in recently anhidrotic horses, although the effect lasted less than four weeks after discontinuing treatment. The use of this treatment requires further investigation to fully validate its usefulness, as that study yielded very equivocal findings.

Anhidrosis is a very serious syndrome affecting a substantial amount of horses in Florida and across the southeastern US. Many affected animals are no longer able to live in Florida or be successful competition horses.  Additional work is needed to better identify the specific cause of anhidrosis and will help in developing useful treatments.

A new study at UF is investigating the sweat genes of the horse and their genetic association to anhidrosis. If you own a horse that has been diagnosed with anhidrosis, please contact the Brooks Equine Genetics Lab for more information. You may also call (352) 273-8080 or email equinegenetics@ifas.ufl.edu. 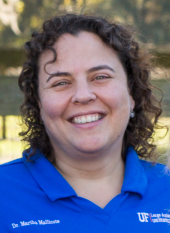