Watse, a 12-year-old Friesian, stood out in the Saddle Seat pleasure division show ring, winning multiple first place finishes throughout his career. His owner, Karl Hirschhorn, and caretaker and trainer, Chelsie Smith, made sure Watse was fed with great care and was monitored around-the-clock.

One day in July, Watse seemed uncomfortable and was unwilling to eat. The barn manager called their local veterinarian, Dr. Katie Lott-Ellis of Jacksonville Equine, to come out to the farm.

Soon after, Watse seemed to be more in pain, and Dr. Lott-Ellis recommended that he be taken to the UF Large Animal Hospital for treatment. Right away Watse was in the trailer on the way to Gainesville.

When they arrived at UF, Dr. David Freeman, a professor and UF Large Animal Surgery Service Chief, along with Dr. David Dymock, a surgical resident of the UF Large Animal Hospital, performed a complete colic examination and recommended surgery immediately.

Friesians are very large horses, but the facilities at the UF Large Animal Hospital include large, padded induction stalls, a hoist and monorail system that can lift up to two tons, large surgical tables that allow for quick transport of anesthetized animals, and a specialty colic operating room, allowed the 600-kg horse to be moved quickly into surgery.

“Watse’s size was a concern because the weight of a large anesthetized patient can cause nerve or muscle damage,” Dr. Freeman said, “but our team consists of board-certified anesthesiologists and surgeons that can prevent this problem.”

The goal is to complete the surgery as quickly as possible, but the problem in Watse’s case was the very complicated nature of his small intestinal obstruction. 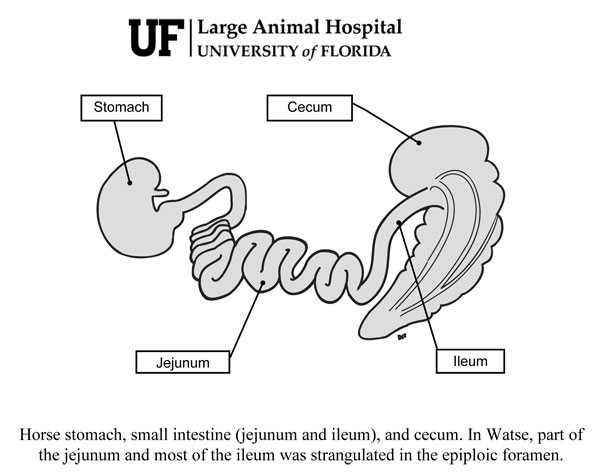 “The surgical challenge with this case is the severity of swelling in the strangulated piece of intestine,” Dr. Freeman said. “Although normal intestine can easily move into the epiploic foramen, once it becomes swollen with blood and fluid, it cannot be easily pulled back through the same opening. In most cases, we can pull the strangulated intestine into the correct position but there’s always the risk of tearing a major vein to the liver during this procedure.

“In Watse’s case, it was impossible to pull the intestine through so we had to perform a rarely used method that involved partial resection while the intestine was still strangulated. Because the ileum was involved, we had to do a jejunocecostomy, which is a complicated surgery that involves joining the jejunum to cecum and bypassing the affected ileum. In addition, Watse had a severe colon impaction that had to be relieved by emptying his colon through an incision. All these steps require a lot of time but we were able to complete them quickly and this was critical in saving Watse’s life.”

“After surgery, Watse developed a fever, a dry cough, an incisional infection and mild pneumonia,” Dr. Dymock said. “Pneumonia is very rare after colic surgery but might have been a factor of Watse’s large size. However we were able to treat all the problems at the hospital.”

Watse’s caretaker was more than happy with the results.

“The surgical staff did an amazing job with Watse,” Smith said. “Thankfully Watse came out of the surgery and passed all the hurdles necessary to return to our care.”

The recovery process was long. It involved hand walking and hand grazing. A hernia belt was used because the incision was infected and large horses are at risk of developing hernias. After about six months, Smith and Hirschhorn began to recondition Watse for the show ring.

“We started Watse back in training to see if he still had the ability to remain a show horse,” Smith said. “After careful reconditioning we decided to bring him to a show in Tampa nine months after the surgery. He has been to other horse shows since and continues to improve as well as retain some of his old spark in the show ring.”

The road to recovery was long, but all of the steps taken helped the positive outcome. The advanced surgical techniques, the facilities, the treatment and the exceptional care Watse had once he returned home were major players in Watse’s recovery.

“We are very pleased with the surgical and all the other staff at the University of Florida,” Smith said. “While we hope we never end up in this situation again, we thank everyone who helped us bring Watse home.”